Sardinia with its pristine and unspoiled nature, breathtaking landscape and Caribbean-like beaches represents heaven on Earth, an oasis in which to escape and lose oneself in the midst of nature and full relaxation. The unique smell of oleanders, myrtle and brooms from The Mediterranean shrubland creates a warm and distinctive atmosphere  which recalls an inextinguishable lost paradise. Every single corner of this island deserves to be discovered. 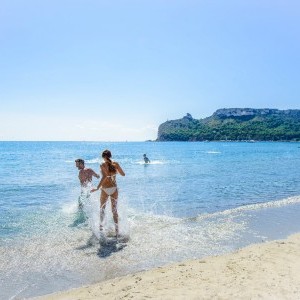 One of the most beautiful and biggest city beaches in Europe, with eight kilometres of coastline in the territory of Cagliari and QuartuSant'Elena, where you will find everything you desire: soft sand, crystal clear sea, relaxation, aperitifs, fun and sporting activities.

t the beginning of the 20th century, the inhabitants of Cagliari preferred the western part of the Golfo degli Angeli. Then, little by little, as they began to appreciate the white dunes, the first establishments and a summer camp were created and, lastly, the famous bathing huts were built (completely removed in 1986). The area has become increasingly populated, earning it the name of 'SpiaggiadeiCentomila' (beach of a hundred thousand). Today, Poetto is the undisputed 'sea' of Cagliari's hinterland and the favourite destination of visitors to the capital city in the summer and on any sunny day throughout the rest of the year. It extends from the Margine Rosso, on the Quartu Sant'Elena coastline,as far as Sella del Diavolo, increasing its charm by dominating the little port of Marina Piccola from above. You can access the promontory from Calamosca, via a one-hour itinerary, which is beautiful by night.

The sandy shore has a modern promenade behind it, where you can take long walks, on foot, on roller skates or by bike, while the characteristic little kiosks by the beach offer refreshments and entertainment. There are easy and convenient links to get to the town and the services are efficient: from the bathing establishments to the diving centre, the sailing schools, beach tennis and volley courts, restaurants and commercial activities at the amusement park. Poetto is also a centre of nightlife, especially in the summer: live music, clubs, dancing lessons and other attractions. The coastline borders with the Molentargius-Saline Park: from here, you can admire the flamingos or tour the park by bike. 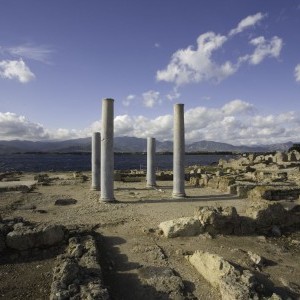 The coast that stretches from Santa Margherita di Pula to Teulada’s Marina is characterized by beaches and rocks. Thanks to its wild and primitive beauty, the area comprised between Capo Spartivento, Chia and Capo di Pula, which witnessed the birth of ancient historical settlements, traces of which can be found in the archaeological sites of Nora and Bithia, has become one of Sardinia’s fastest growing tourist developments.Nestled in a spectacular bay between Capo Malfatano and Capo Spartivento, Tuerredda is regarded as one of Sardinia’s most beautiful beaches thanks to its fine white sand and its transparent waters which recall a Caribbean postcard. The beach is flanked by Mediterranean shrubland, dominated by junipers and lentiscus, and located right in front of the homonymous island, a few hundred meters from the shore. The small island of Tuerredda, where the northeaster wind reigns supreme, is like a miniature world in which to spend a few hours, lying on the beach or on the smooth and warm rocks, or exploring the inland, home to seagulls and other birds, covered by fragrant shrubland. Stretching around sand dunes rising up to 20 metres, topped with centuries-old junipers shaped by the wind, Su Giudeu beach and the Cala Cipolla cove are also considered among the most beautiful beaches in the Mediterranean. 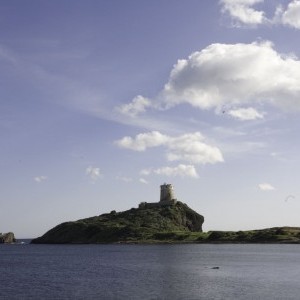 The beaches in Villasimius, some boasting fine white sand, others grainy golden sand, with the sea changing shades, from limpid azure, to shiny turquoise and emerald green.As a statement to the undeniable value of these places, the Capo Carbonara Coast with the islands of Cavoli and Serpentara have been awarded the status of Marine Protected Area.
Among the natural wonders of this area, the beaches of Porto Giunco and Punta Molentis are particularly noteworthy. Porto Giunco – next to Simius beach – is characterized by its opal pink sand, whose colour is due to detritus created by the slow erosion process performed on the pink granite of the coast by the sea. Its nickname “the beach of two seas” derives from the fact that the beach is located between the sea and the Notteri salt pond. In the winter, the latter is home to rare specimens of pink flamingos resting in the crystalline waters of the pond.
An ancient tower rises on a nearby promontory offering spectacular views over Villasimius and the surrounding area. The two magical inlets of this beach, protected from the wind, offer visitors the opportunity to bathe in countless shades of blue.